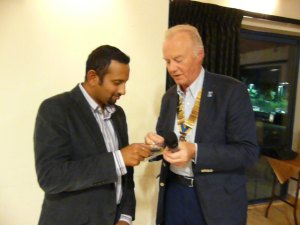 Sumindra Ratnayaka is the latest member at the RC of Langley Park. This club that meets in a tennis and squash club’s rooms in leafy Beckenham, nearly our furthest club in the North-west of this District. The picture is of him being inducted as a club member on the 9th. September. Sumindra, who joined the club after checking it out by its web-site (Club Secretaries take note!) then e-mailed them directly. Unsuprising because he has his own Telecoms. and Media Consultancy and so is very savvy on all electronic media methods. Originally from Colombo SriLanka Sumindra was a Rotarian with RC Colombo Metropolitan.

Club President John Williams said: “I am delighted to have Sumindra as a member, as well as bringing these new skills to our club he is enhancing our international appeal further”.

Further, because earlier this year Langley Park also inducted Kaushik Gandhi – known as ‘Koke’, despite his famous surname. He had seen one of the RIBI advertisements and was a direct introduction by the District Membership team. Koke is an investment banking business analyst and lives locally. Sumindra is now a member of the club Foundation committee, and Koke is working with the International committee.

District 1120 wish them both a long and distinguished career with Rotary and LPRC!

Portrait of Koke from the 16th. Sept. meeting.